Or just scroll on down.

How Do You Play: 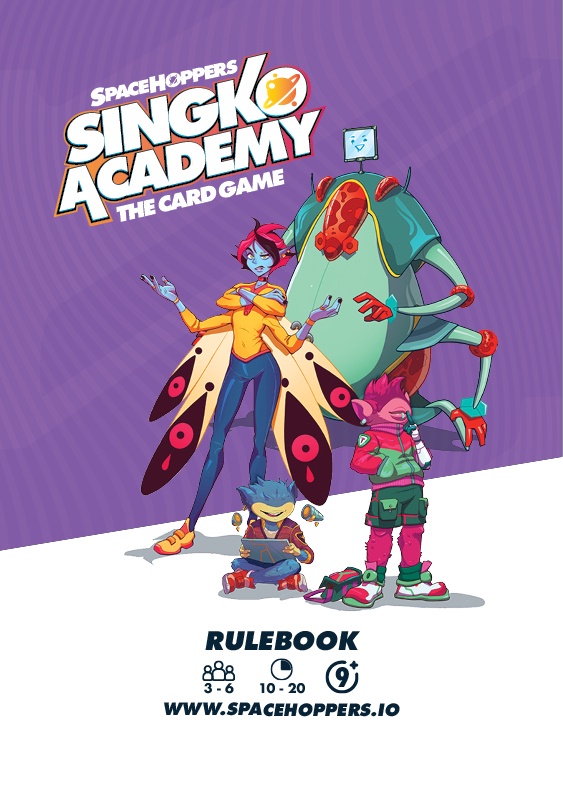 Okay, okay, if you don’t like to read all the instructions, here’s how you can jump right in!

What’s In The Box:

Divide the cards into 5 piles: Hop, Crew, Souvenir, Encounter, and Monkey Wrench. Shuffle each stack separately and place the card piles face down in the middle of the play area.

Deal 4 Crew Cards to each player, face-up. Each player arranges their Crew Cards in a row in front of them.

Put the remaining Crew Cards back in the play area. This is now the spaceport pile, where extra crew lives. 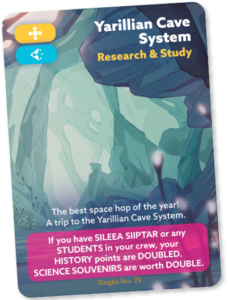 A Hop Card is played once per game and establishes the rules for everyone’s crew which could be good…or bad.

The dealer picks 1 Hop Card off the top of the pile and places it face-up in the play area. Read the hop description out loud to all the players. The face-up Hop Card applies to all the players in this round of play. Place the remaining Hop Cards off to the side. 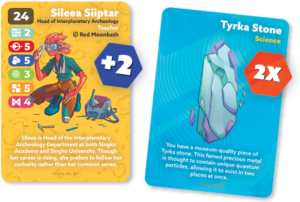 If the Hop modifies your Souvenir or Skills, place a Modifier Token on the modified card for easy identification.

Deal 2 Monkey Wrench Cards face down to each player. Each player reads their own cards – but don’t tell anyone else what they say. 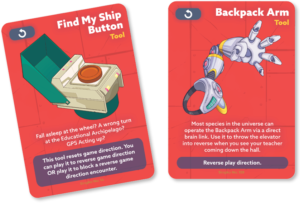 After you play a Monkey Wrench, discard it to the bottom of the monkey wrench pile and pick a new card. You should always have 2 Monkey Wrench Cards in your hand.

On a player’s turn, before they pick an Encounter Card, they have the option to exchange 1 (only 1!) of their Monkey Wrench Cards and can play it right away.

Deal 1 Souvenir Card face up to each player and return the rest of the pile face down in the play area.

You’re now on your way to filling that souvenir shelf!  As you collect Souvenir Cards during play, these should be arranged in a line in front of you, so all the other players can see them clearly.

You need 5 souvenirs to win the game or 4 if you are playing with 6 players.

A player’s starting hand will now look like this: 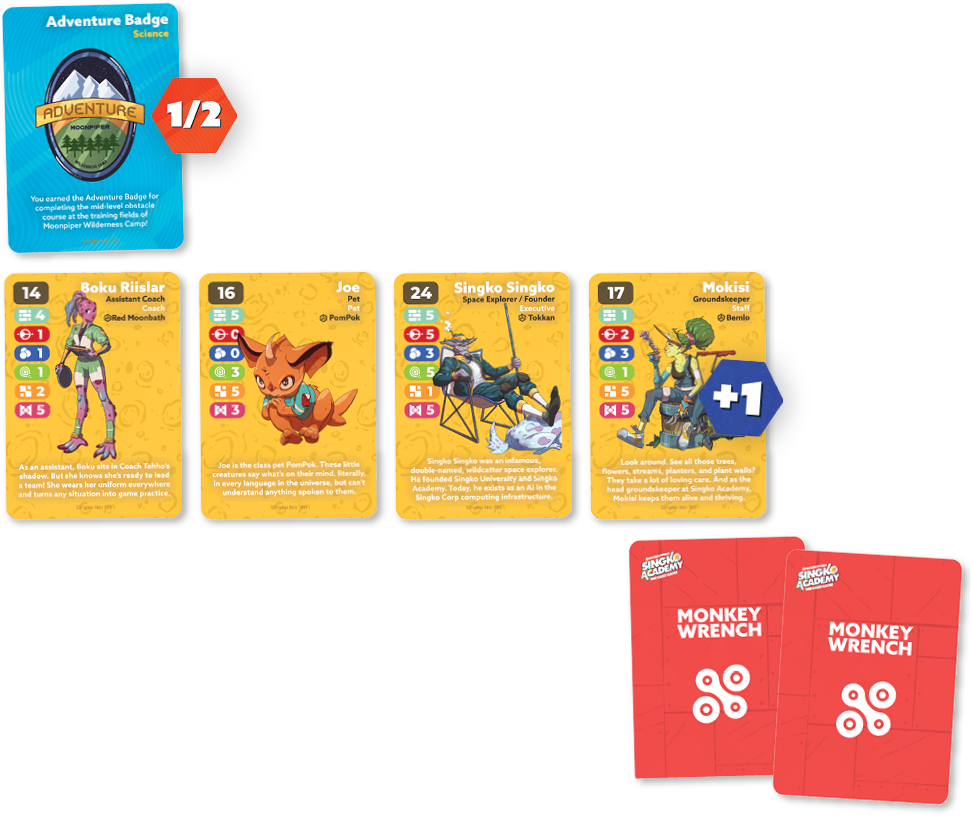 To start the game the first player clockwise from the dealer picks an Encounter Card, reads it out loud, and follows its instructions. If any players want to play a Monkey Wrench during this Encounter now is the time to do it. If not, this Encounter ends, the player discards their Encounter Card, and the turn moves to the next player. 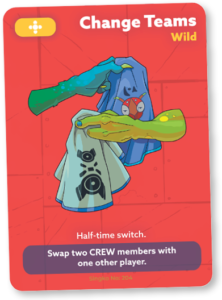 The last Monkey Wrench played takes precedence over the others. If no other players choose to play a Monkey Wrench Card that turn ends and moves on to the next player who picks from the Encounter pile.

If a player has picked up a Souvenir Card during play, they place it face up in front of them so all the players can see it. 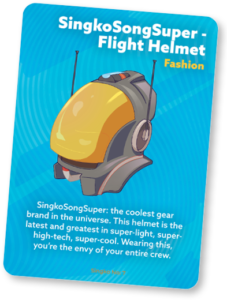 If the action description on an Encounter Card doesn’t apply to you or your crew, your turn is simply over – unless you can play a Monkey Wrench!

If any player loses all of their Crew cards, they are out of the game. But if a player is down to 1 crew card only, no other players can steal that crew member. However, they can swap if an Encounter or Monkey Wrench calls for it.

A player wins the game when they have collected 5 Souvenir Cards (or 4 if you’re playing with 6 players) and no other player has a Monkey Wrench Card to play that would allow them to take away 1 of those Souvenirs.

If you have a Souvenir Card that is worth double, that counts toward your total souvenir count. Example: if you have 4 Souvenir Cards, and one has been doubled, you now win with 5 Souvenirs. If one of your Souvenir Cards is worth half, and you have 5 cards showing, you still need one more.

When an Encounter says you HAVE to play your monkey wrench, you have to. The only reason you wouldn’t be able to play is if the Monkey Wrench Card describes a situation or specific cards that are not currently in play so it doesn’t apply to ANY of the players or crews on the table.

If your Encounter or Monkey Wrench calls for picking a new Crew Card and there are no more left – too bad, you won’t be able to. 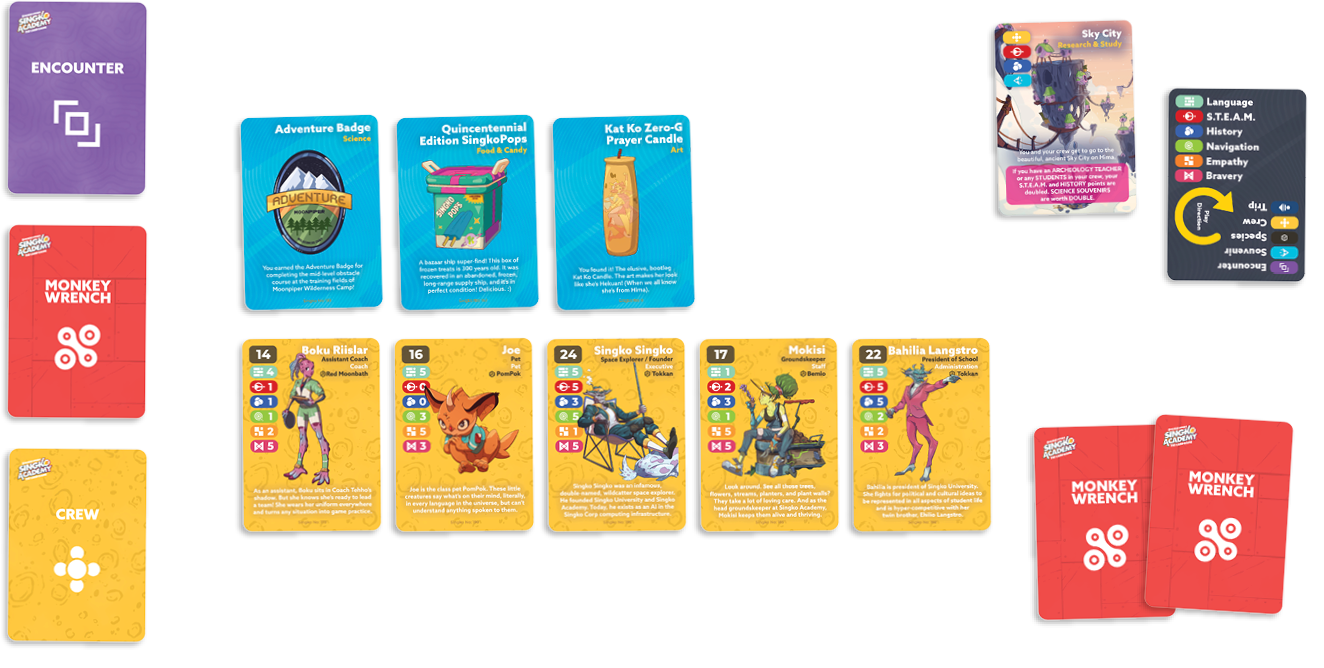 After you’re familiar with the Crew Cards, you’ll probably have favorite characters. We know we do! So try the BUILD A CREW mode.

In Build A Crew you place all the Crew Cards face-up in a grid in the middle of the table. We suggest 3 rows of 10 cards – but set it up whichever way rocks your world!

Next, going clockwise from the dealer, each player picks 1 Crew Card until each player has 4 Crew Cards total. This is your crew!! Nice work.

Shuffle the remaining Crew Cards and put them in a pile face down in the center of the play area. This is now the spaceport pile. 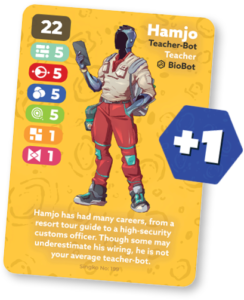 In “Multi-Hop” Mode instead of one shared Hop Card, deal 1 Hop Card face up to each of the players. These individual Hop Cards only apply to the player who holds them.

Apply for a review copy!